An architect that develops ways for social housing providers to build energy efficient homes on a budget has been rewarded with a cash injection of £52,000 from the Government, tax specialist Catax can reveal.

Much of the company’s work focuses on making Passivhaus standards quicker, easier and cheaper to achieve.

It received the cash windfall in the form of Research & Development (R&D) tax credits, which was particularly welcome because the company had previously been advised that its work did not qualify as R&D under the rules.

However, after Catax was consulted, the mistake was spotted and the firm was handed cash incentives of £52,000 over the past three years.

The cash boost provided by the R&D tax incentives has helped the company to increase the amount of Passivhaus work in its pipeline by 900% in three years.

John Gilbert Architects (JGA) offers a ‘Hab-Lab’ service to clients, assisting them in getting the most from energy efficiency building products, improving comfort for tenants and reducing fuel poverty.. Hab-Lab is delivered in partnership with the Mackintosh Environmental Architecture Research Unit (MEARU) at Glasgow School of Art.

JGA’s work involves advising constructors how to best meet Passivhaus standards, and helping existing property owners retrofit their buildings to make the grade. To do this, it researches the performance gap of buildings, which is the difference between how buildings are expected to perform and their actual results over the long term. Most of JGA’s clients are housing associations and local authority housing departments.

“We’d been told by our accountant that we couldn’t make a claim so this was a pleasant surprise and it was more rewarding financially than we expected.

“The main thing this tax relief has done is that it has allowed us to keep investing in R&D. We think we should be spending 10% of our turnover a year on R&D and the money this incentive has brought into the practice has taken it beyond that.

“Getting this funding has also allowed us to begin doing the same work with non-domestic buildings such as swimming pools and schools. We’re doing more of what we’re good at and it has helped us to continue to employ people to perform research in this area, driving even more Passivhaus projects.”

Social housing is the firm’s focus because meeting Passivhaus helps to reduce fuel poverty for tenants. Much of the qualifying work is being carried out by a research associate employed as part of a Knowledge Transfer Partnership (KTP).

Much of their work means optimising the use of components to improve efficiency and air tightness, which is a big factor in energy loss.

JGA says the biggest variable is almost always people, including their behaviour and occupation patterns. Poorly installed and badly applied energy efficiency solutions can also lead to problems with moisture such as condensation or mould, and fail to bring down energy bills, which is the ultimate goal. 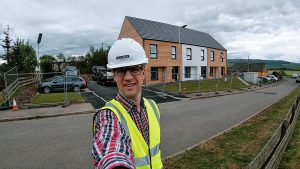 “This is the kind of thing that a lot of architects are doing now. The industry is digging into the science a lot more because many developers and providers are paying for what they believe are energy efficient buildings but are only getting 60% of the building performance they expect.

“The innovation for us is working really closely with the contractor to optimise the use of components and the process to get schemes built at a social housing budget.”

R&D tax relief was introduced by the government in 2000 to incentivise innovation, and result in either a reduction in a limited company’s corporation tax bill or a cash lump sum. John Gilbert Architects took the cash injection as opposed to the deduction in corporation tax.

“When Matt and I sat down they were very close to their year end, so it was imperative to get a claim done within a couple of weeks.

“They had been previously told they did not qualify but no accountant can be proficient across every avenue of finance. It’s nothing to be embarrassed about. It’s a very specialist area of tax and we help hundreds of accountants achieve the best result for their clients every year.

“JGA have been able to expand the scope of their R&D because of the tax credits, and this is something we hear from clients all the time. It’s a virtuous circle and many companies are already doing work that qualifies as R&D, they just don’t realise it.”