A food specialist that re-invented how it smokes and slices salmon is celebrating a £165,000 injection of government incentives, tax specialist Catax can reveal.

Harbourside Products is a great example of how SMEs should be using the HMRC R&D tax relief scheme to better reward themselves when investing in new products and processes.

The specialist food manufacturer spent two years and over £200,000 reinventing the way it smokes its fish and creating a whole new range of premium pâtés and terrines. It also invented an entirely new way of slicing smoked salmon to reduce waste.

Harbourside Products is a family-run business that produces fine smoked products in Cumbria that are sold all over Britain and internationally. In fact, much of its smoked salmon is exported to Italy. 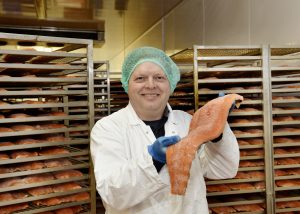 Richard Hodgson runs the company with his cousin John Haywood, 55, after they bought the factory in 2015. It had already been part of the family business before it was sold in 2009, but, after the purchaser moved on from the premises, they spotted an opportunity to re-enter the market. The move saved 60 jobs and ensured that fish smoking continued in Maryport, where the company is based.

The firm’s speciality foods have taken on a whole new flavour recently thanks to an R&D tax relief claim that earned the company an injection from the Government of £164,836.

R&D tax relief was introduced by the government in 2000 to incentivise innovation, and result in either a reduction in a limited company’s corporation tax bill or a cash lump sum.

Most of Harbourside’s claim through Catax related to the way the company improved the smoking process and developed recipes for a new range of products including premium pâtés and terrines of chicken, duck, game, ham hock and rabbit.

Harbourside had branched out beyond smoked salmon after buying another supplier, which had gone into liquidation.

“So much of the company’s time and energy had been spent refocusing the business on more premium products that by the time all our initiatives were combined, it had really added up.

“For our new range of pâtés and terrines, we had to come up with totally new recipes and do lots of tests on the microbiology of all the food to determine its shelf life. There was a lot of product development and we had to use an accredited lab to test for various bacteria over time.

“We also went back to the drawing board on how we smoke our salmon. We felt there were so many smoked products on the market, we didn’t want to produce anything bog-standard. We wanted to stand out more.

“So we spent more than two years fine tuning the salting and drying process. If you let fish dry for too long, you get a thick pellicle and more waste but you still want a nicely smoked product. The result of our improvements was a more subtle, milder product that costs the same to produce and buy.”

Harbourside also realised that a lot of salmon was going to waste because there is less of a market for the parts of the fish that appear less red and more brown in colour. The company decided to do something about it and developed a whole new way of slicing salmon that results in a much more attractive product. It uses the same cuts of salmon but it appears more red in colour, resulting in a price per kg of between £4 and £5, as opposed to 50p–£1 previously. Some companies even discarded this part of the fish altogether.

Harbourside now has 65 staff in total, with a turnover of £4.5million.

“We had claimed research and development tax relief before but not on this scale, so this time around we had no idea the business would be in line for a windfall of this size.

“Now that we’ve benefited, it really underlines how worthwhile all the R&D was. We have a business that is comfortably producing food that is head and shoulders above the competition in terms of quality, and we’ve been rewarded on a massive scale for doing the work that got us here.

“The claim ended up being game changing in terms of how likely we are to keep innovating in the future. We have been able to recoup a significant chunk of our turnover and that ultimately helps protect the business and local jobs.”

“We’re delighted for Richard and his colleagues. Harbourside is a perfect example of how R&D tax relief can unlock valuable injections of capital when a company’s activities are looked at in detail.

“The R&D tax relief scheme is actually quite generous and that’s really the point. The Government wants companies to use it and keep on innovating, and we’re sure that’s what  Harbourside will continue to do.

“The sums available can make all the difference to SMEs carving out a name for themselves in new markets and with new, improved products.”